If you missed Day 1 of hiking the Four Pass Loop in Colorado you can check that out here. 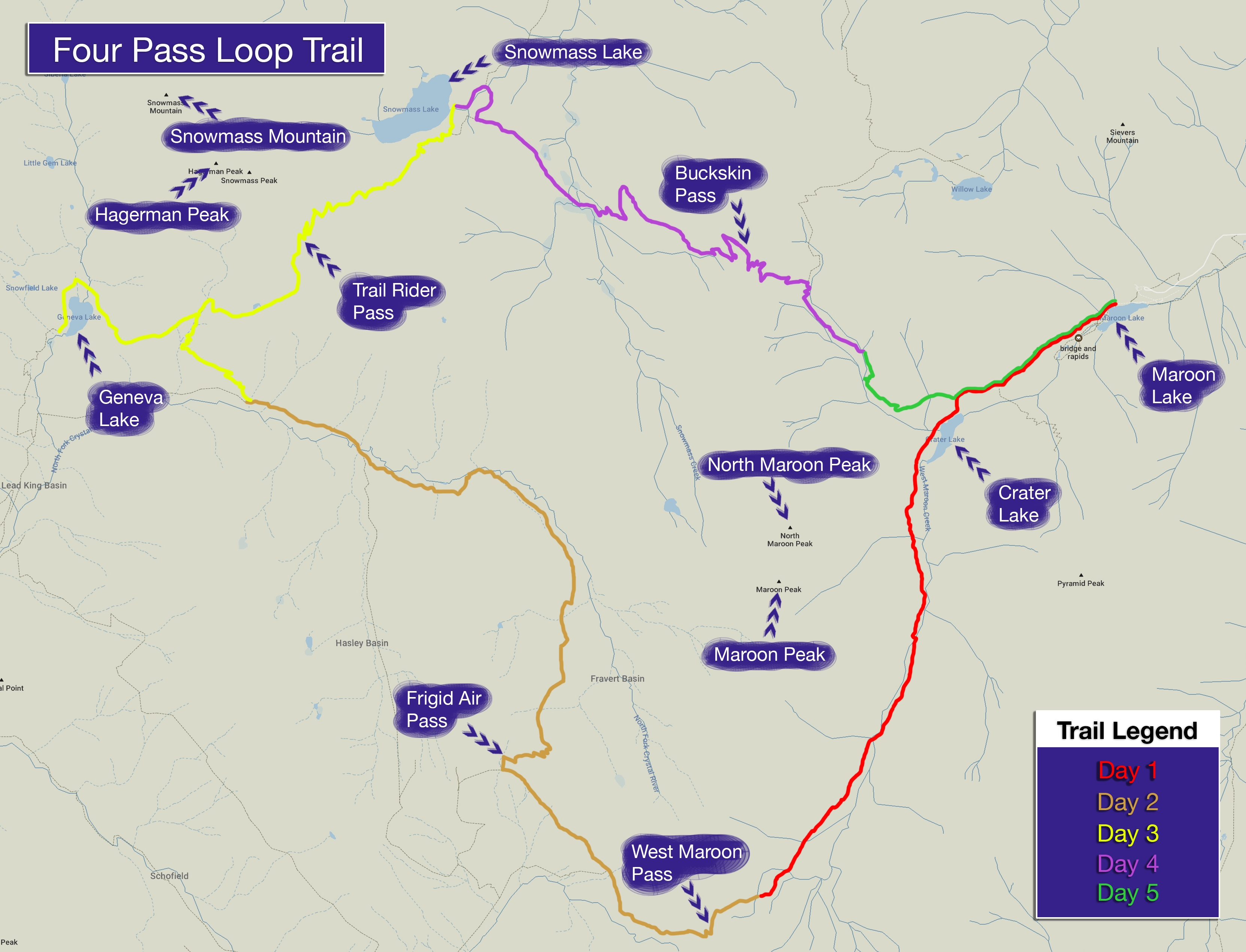 This was a long day and should be started early to get over the two 12,000′ passes (West Maroon Pass and Frigid Air Pass) and to the safety of treeline in the Fravert Basin before any inclement weather has time to roll in. We started the day by filtering and filling our water bags in the stream near the camp, packing up our gear, and then setting out to continue hiking the Four Pass Loop.

We took on the climb up to West Maroon Pass (12,465′). This is a steep climb especially with fully loaded packs full of supplies. We took it slow and were passed by many other backpackers, and trail runners. Once at the pass, we took a breather and enjoyed a snack before descending the switchback into the valley on the other side.

Into the valley beyond West Maroon Pass 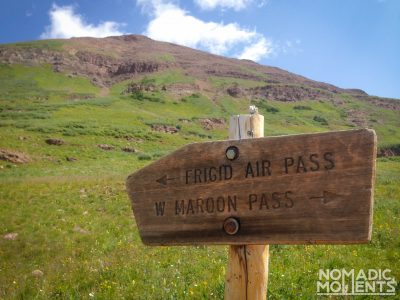 The trail into the valley doesn’t reach tree-line before arriving at a fork. There is no camping in this area of the trail. It is my understanding that the trail to the left heads towards Crested Butte, Colorado. We took the trail to the right (North Fork Trail #1974) and started to climb up towards Frigid Air Pass (12,405′). The climb here is a bit more gradual than the West Maroon Pass and seemed easier. The hike up is full of colorful wildflowers and is an enjoyable climb.

The views of West Maroon Peak from the top of Frigid Air Pass are stellar. The weather was starting to get a little cloudy and so we only stopped long enough for another snack and put off lunch until we arrived back at tree-line.

Into the Fravert Basin

After our snack, we headed down the switchbacks towards the Fravert Basin. The Alpine bowl on the other side of the pass is very large and it was some time before we arrived back at the relative safety of tree-line.

We started to see dispersed campsites as soon as we hit tree-line. Before long we arrived at the North Fork of the Crystal River which is more like a stream. We sat down on a rock near the creek and had lunch. The trail through the Basin more or less follows the stream as it flows through the valley. At one point the trail descends sharply as the stream turns into a mostly shrouded waterfall. I really liked a site near the base of the waterfall, but it was already taken. All the sites are available on a first-come basis.

After the falls the valley widens and before long we had to cross the stream. This was the only place where we had to remove our shoes to ford a water crossing on the entire loop. As should be expected for snow-fed streams it was cold even in mid-August. We continued down to the next trail intersection. The trail to the right (#1976) is known as the North Fork Cutoff Trail and it climbs steeply up the adjacent ridge towards Trail Rider Pass. We continued to the left down #1974 about a quarter of a mile to a campsite located in the woods near the valley’s stream. This was a great place to camp while hiking the Four Pass Loop.